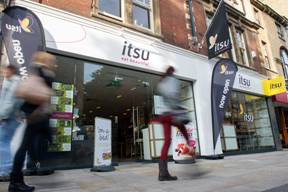 The new itsu store in Oxford

Having passed a few itsus in London I was vaguely aware it was somewhere to eat, but hadn’t actually been in one until the new one in Oxford opened. Now I know I’ll be grabbing lunch there as often as possible! Paul and I took Erica, who is now 1 year old, hopeful that she’d eat something on offer. Feeling ravenous, we went for the hot veggie options – the noodles for me with veggie dumplings and the rice for Paul with 7 veg. For Erica we got the rice with chicken (so I could try some too!), and a fruit fix frogo pot with frozen yoghurt on the top for dessert.

All of the food we had was excellent, everything was very fresh and the flavours were brilliant. I particularly liked the pickled seaweed (kombu) on the chicken and rice dish, and the ithai sauce on the rice dishes was delicious. The downside is this sauce is not vegetarian – we appreciate that fish sauce doth maketh the dish, but if you were a strict veggie (Paul makes an exception for fish sauce in thai food), you would be missing out on a taste sensation. It seems a shame that there is only one alternative “broth”, (assuming that it is the one I had on the noodles) rather than something resembling the ithai sauce. The broth on the noodles was lovely too, but not the lovely spicy coconut kick of the ithai. We were amazed to find that Erica too liked the ithai sauce, nom nom. She also relished eating my udon noodles.

I can’t fault the food we ate, but I think it is fair to say that itsu is not targeted at veggies, with very few veggie options available. Rather it is targeted at those preferring a high protein, low carb diet. A few more veggie options (meals, not just the small go-go pots), would be brilliant to see – and give us more reasons to go back again and again.

As for the place itself – clean, nice staff, and plenty of yummy condiments on the tables. Being able to help yourself to water was a bonus too. For those with little ones, don’t be put off by the pedestal stools – I am assured highchairs are on the way.

I imagine some of the other eateries / takeaways in Oxford are going to have to pull their socks up or lose quite a bit of business to itsu, not only because of the quality of the food, but the prices too – it seemed such good value compared with more mundane sandwich type options, or the more expensive places offering similar dishes like Wagamamas. Not only was it good value at full price – they reduce remaining stock to half price before the end of the day to try and avoid food waste – brilliant.

This entry was posted in Uncategorized. Bookmark the permalink.